Marijuana refers to the dried flowers, leaves, and stems of the Cannabis plant. The main psychoactive chemical in the plant is called tetrahydrocannabinol, or THC. Cannabidiol (CBD), a non-psychoactive cannabinoid present in marijuana, has potential therapeutic and medicinal effects. THC and CBD are two of many cannabinoids present in marijuana. Cannabinoids refer to chemical compounds that bind to cannabinoid receptors in our brain. Cannabis can come in many forms, including dried flower, kief (trichomes), hashish, hash oil, and food/fat infusions.

Cannabis is the most commonly used recreational drug in the United States. More than half the adult population has tried it. A national survey by Marist College further shows that 35 million Americans use the drug regularly (at least once per month). Recreational users call the drug pot, bud, weed, herb or grass. People often refer to the high as “getting stoned.” Although Cannabis remains an illegal drug on the federal level, many states have legalized or decriminalized recreational use the drug. As of 2019, ten states, along with Washington, DC, have approved personal recreational use.

Researchers expect the trend to continue, but not everyone supports legalization. The Marist College survey revealed that 47% of Americans still oppose marijuana legalization. Because each state has specific and sometimes stringent rules governing possession, it is important to know the laws and regulations in the area in which you live. States have become more lenient about non-recreational use, with 33 states legalizing medicinal purposes. Doctors have recommend medical marijuana to treat pain and nausea associated with chemotherapy for cancer patients, glaucoma, and chronic pain.

Both mental and physical effects occur after smoking, vaping, or consuming marijuana. When consumed in food products, effects take 30 to 60 minutes to appear. When smoked, the effect occurs within minutes. A “high” can last between 2 and 6 hours. Users may feel elation, a reduction of stress, metacognition, altered consciousness, increased awareness of sensations, and a feeling of increased creativity. Physical side-effects include dry mouth, red eyes, lowered blood pressure and impaired motor skills. Marijuana also causes increased appetite, known as “the munchies.” Effects can vary greatly from person to person. More severe side-effects include paranoia, anxiety, increased heart rate, a decrease in short-term memory and decreased concentration.

One other serious effect, which researchers have not fully explored, is that of marijuana smoke on the respiratory system. Any substance that users burn and inhale creates carcinogens, which can damage the lungs or airways. Marijuana smoke contains several carcinogens. Typically, users inhale marijuana smoke more deeply than tobacco smoke, which can cause more lung irritation. Marijuana can also increase one’s risk of developing psychosis. The drug can also affect the mental development of teens who use it.

Moreover, marijuana may decrease sperm count in men, making it more difficult to conceive. Mothers who smoke while pregnant may have children with an increased risk of behavioral issues. Researchers have not explored marijuana’s long-term effects, so they cannot make sure conclusions until conducting further studies.

Marijuana’s popularity can easily obscure the potentially harmful effects for those who may have addictive tendencies. However prevalent in popular culture, it is important to recognize the addictive power of marijuana. Here are some of the reasons all users need to be aware of the risks of addiction:

Cannabis is an easily grown plant, which enables individual growers to modify the potency of various psychoactive ingredients. It is difficult to determine the strength of a certain strain of marijuana before it is ingested. This possibility of a high dose of THC means that users can easily smoke or ingest too much. Even if no physical harm is caused, mental anguish can result. Users who are not expecting a strong high can experience extreme anxiety, panic attacks or paranoia.

While marijuana is not physically addictive, it can still be psychologically addictive, especially to those with a co-current psychological problem. Cannabis use can aggravate or even activate latent anxiety disorders. Some risk factors that can help predict one’s likelihood of becoming marijuana dependent include: poor academic standing, deviant childhood behavior, truancy in adolescence, rebelliousness, poor relationships with parental figures, or a familial history of drug or alcohol addiction. If you are missing appointments and events, forgetting important deadlines, neglecting responsibilities, becoming depressed, or experiencing increased anxiety you may be dependent or abusing marijuana.

Marijuana dependence can usually be treated simply with therapy, family involvement, and abstinence from the drug. Marijuana’s harmful effect is still debated in medical and psychological settings, but it is important to recognize that any drug can be abused. If you or someone you know is not themselves, or having a hard time resisting cravings to use, we can help. Call us to learn more about personalized treatment for marijuana addiction. 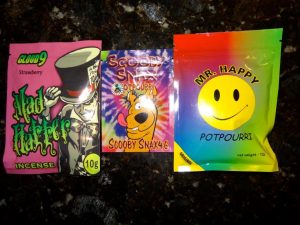 Designed to mimic the effect of cannabis, K2 refers to shredded plant materials that have been sprayed with chemicals that create an instant high.

Because inhalants are typically legal products, they are a particular danger to adolescents and teens, who may find them easier to obtain than alcohol or illicit drugs. According to recent government statistics, the largest segment of users are between ages 12 and 17.

Through e-cigarettes, vape pens, and other devices, vaping allows users to inhale a vapor that contains a variety of chemicals once limited to cigarettes.