OxyContin is a schedule II opiate only available by prescription to treat severe pain. Doctors use the drug to treat post-surgery pain, chronic pain, acute injury pain, and cancer. Patients take the drug orally as an immediate- or extended-release tablet. Pain relief usually begins within fifteen minutes and lasts up to six hours with immediate release formulas. Extended release formulas, which contain more oxycodone, can last up to twelve hours. Because patients feel the effects more slowly, extended release tablets are more dangerous.

OxyContin has a high risk of addiction and misuse even amongst legitimate patients. Due to its high potential for abuse, doctors should only prescribe the drug to individuals who cannot manage their pain with other analgesics. The over prescribing of OxyContin and other opiates has helped fuel the opiate epidemic in America.

Have questions about OxyContin addiction?
Call us at 855-430-9426 to speak with a recovery specialist.

How did OxyContin become a popular drug?

Marketing for OxyContin became a huge industry in the 1990s as manufacturers promoted the drug to individuals and doctors. Pain clinics also became increasingly popular, providing opiate prescription pills as a safe way to manage pain, even as studies showed the addictive nature of the drug. OxyContin become commercially popular because of its marketing and advertising campaigns. The manufacturer even held training sessions for physicians, pharmacists, and nurses at all-expenses-paid conferences. Their goal was to influence the way medical professionals treated pain. It worked too well. By 2004, OxyContin had become the single most abused prescription drug in the United States.

OxyContin abuse starts with lax prescriptions. Without proper screening, addictions might go untreated or unrecognized as users seek prescriptions from multiple doctors with no incentive to ask questions. The drug has also become available on the street. Slang terms include oxycottons, oxy, OCs, or percs, referring to Percocet — a combination of oxycodone and acetaminophen. Extended release formulas of the medication come with a greater risk of overdose and death. Tolerance builds quickly even in patients taking their prescriptions responsibly. In the management of chronic pain as opposed to acute pain the risk of misuse can be even greater.

With extended release tablets, addicts frequently dissolve the outer coating and either snort, inject, or ingest the remaining concentrated drug. This method can lead to overdose if the individual has no tolerance or has recently increased their typical dose.

What are the risks of OxyContin?

OxyContin produces many possible side effects, including constipation, sweating, euphoria, relaxation, loss of appetite, dry mouth, nausea, dizziness, and itching. In more severe instances, OxyContin can result in addiction, respiratory depression, and low blood pressure. Mixing the drug with other prescription drugs, illicit drugs, or alcohol can also be quite dangerous. Opioid withdrawal occurs as well with cessation of the drug. OxyContin is more powerful than morphine when taken orally and can lead to severe withdrawal. We’ll discuss this more below. OxyContin also carries some unexpected, but potentially deadly side effects. Consuming grapefruit in any form, for example, can increase chances of having an adverse reaction to the drug. For all users, taking more than prescribed or for longer than prescribed can produce an unintentional overdose.

Are there withdrawal symptoms for heavy OxyContin users?

As with other opiates, OxyContin can produce severe withdrawal symptoms, including anxiety, panic attack, nausea, increased pain sensation, insomnia, lowered hormonal levels, muscle weakness, fever and flu-like symptoms. Individuals with a lowered tolerance, such as those in early recovery, are at greatest risk for overdose. Signs of overdose include shallow breathing, slowed heart rate, cold or clammy skin, low blood pressure, constricted pupils, circulatory collapse and respiratory depression or arrest. In rare cases of reduced breathing over a long period of time, spinal cord infarction and ischemic damage to the brain may occur. As of 2011, OxyContin led drug-related deaths in America. Heroin and fentanyl have quickly eclipsed OxyContin as the leading cause of drug related deaths since then.

What are the widespread dangers of OxyContin?

The availability of prescription drugs to teenagers, either through prescriptions meant for adults or as a less daunting drug option because of its medical presentation, has enticed many to abuse the drugs. This has been of particular concern in economically depressed areas in which medical treatment is scarce but pain clinics are plentiful. Many young individuals have developed opiate addiction that started with OxyContin. If you or anyone you know are exhibiting signs of opiate misuse or abuse it is important to seek professional help. 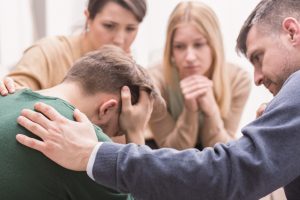 An intervention is an event designed to help a person suffering from addiction seek treatment. Friends and family typically plan interventions, but they many involve professional intervention specialists. 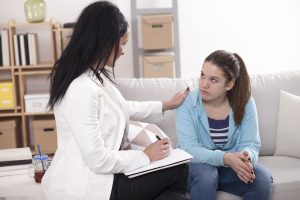 Formerly known as a dual diagnosis or a dual disorder, co-occurring disorders refer to the presence of a mental illness, personality disorder, or addiction alongside a substance abuse disorder. The term may also refer to separate, but co-existing disorders, such as anorexia nervosa and depression.