A new study suggests a link between excessive social media use and clinical addiction. Here’s what to know, and how to scroll mindfully.

Most of us don’t think twice about the time we spend on social media. Whether scrolling through Instagram or catching up on Facebook, social media is how we stay connected to friends, read our news, and even relieve stress. And while many of us could probably cut down on our screen time, the term “social media addiction” — which is not recognized by the Diagnostic and Statistical Manual of Mental Disorders (DSM-5) — has almost become tongue-in-cheek, referring more to a relatable cultural phenomenon than a genuine health issue.

Social Media Use and Addiction: The Research

A study by Michigan State University (MSU), published in the Journal of Behavior Addictions, has shown a connection between excessive social media use and impaired decision making associated with addictive behavior.

In the study, participants took a survey that measured their psychological dependence on Facebook based on their use, how they feel without access to it, their attempts to quit, and the impact that Facebook has had on their job or studies.

Researchers then led participants through an exercise called the Iowa Gambling Task, a test used in the psychological community to measure impaired decision-making in those who struggle with substance or gambling addiction. To successfully complete the task, participants must identify outcome patterns in decks of cards to choose the best possible deck. Participants who struggle with addiction perform, on average, measurably worse than control subjects.

Dar Meshi, assistant professor at the MSU College of Communication Arts and Sciences and author of the recent study, theorized that prolific social media users would demonstrate the same impairment as those with clinical addiction. It turns out, he was right.

This is the first time researchers have shown that social media overuse can rewire the brain in ways similar to clinical addictions.

Why Does This Matter?

With 3.5 billion active users worldwide, social media is nearly impossible to avoid. By understanding how the time you spend on Facebook, Instagram and Twitter may be affecting your brain, you can better protect yourself against unhealthy use — and the kinds of thought patterns that may encourage other addictive behaviors.

Meshi attributes the correlation between social media overuse and drug addiction to the brain’s reward system. As he explains, the brain responds to social rewards in the same way that it does to drug consumption or monetary rewards. That is, it releases dopamine to encourage more of that behavior. In fact, developers purposely build apps with this dopamine hit in mind. Instagram, for example, uses elements of slot machines to hook users on the pleasant feeling of seeing “likes” appear.

In another parallel to substance abuse, social media users can build a tolerance to the social rewards they receive. As they become accustomed to a certain number of “likes” or comments, they need more and more positive reinforcement to get the same dopamine hit.

Meshi said he hopes his findings will give more people pause about how much time they spend on their phones.  “Around one-third of humans on the planet are using social media, and some of these people are displaying maladaptive, excessive use of these sites,” he said. “Our findings will hopefully motivate the field to take social media overuse seriously.”

Beyond the risks of excessive use, social media can also affect users through the content they see. The highly curated posts that populate Instagram can spark feelings of inadequacy or isolation. Posts depicting drug or alcohol abuse can normalize risky behavior. Drug and alcohol brands, craftily publishing through social influencers, glamorize life with their products, suggesting that the right cocktail or vape pen will lead to more friends and popularity. All of these factors can lead to substance abuse. Unsurprisingly, teens are especially vulnerable.

Teenagers are among social media’s most prolific users. The Pew Research Center reports that as many as 81% of teens aged 12 to 17 use social media, compared to 67% of adults. For many, the habit starts in childhood. A 2016 study reported that the average American kid receives his or her first cell phone at 10.3 years old, down from age 12 in 2012.

Unfortunately, the still-forming brains of kids and teens aren’t equipped to handle the emotional consequences of social media, which can leave them feeling pressured to change their appearance, participate in risky behaviors for “likes,” or engage in cyberbullying.

The National Center on Addiction and Substance Abuse reports that 90% of teens see their friends drinking, using or engaging in risky behavior on social media before the age of 15. The same study found that these images can make teens three to four more times as likely to use drugs and alcohol themselves. 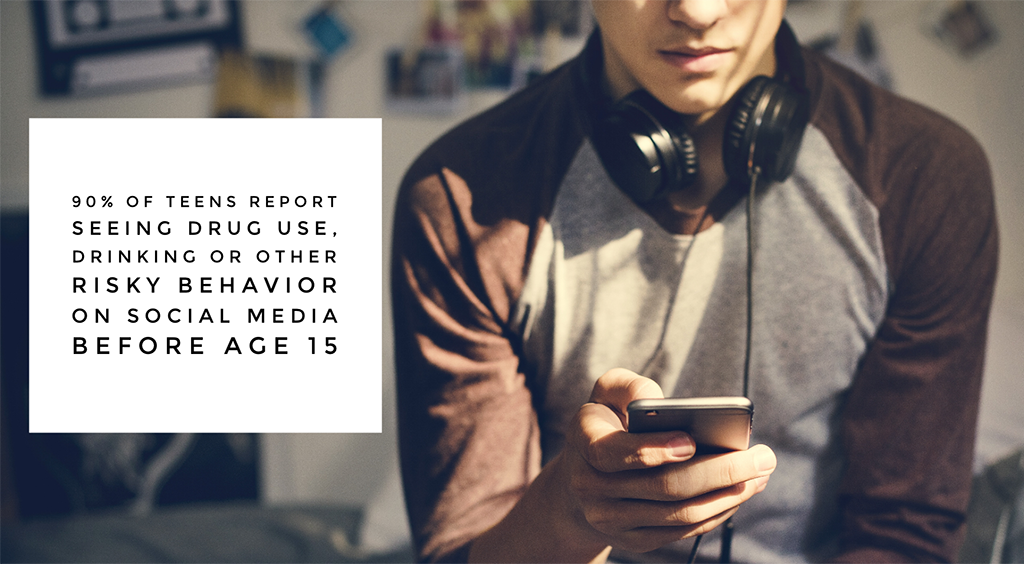 Peer pressure and cyberbullying exacerbate the problem, and it isn’t all direct. Columbia University reports that while 19% of teens have been victims of cyberbullying at some point, passive influences also play a role. Merely seeing a peer receive praise for risky behavior, such as drinking or taking illegal drugs, can lead others to seek out the same kind of approval.

Technology is also making it easier for teens to source illegal drugs, whether through a dealer or direct. In some cases, teens can arrange a buy entirely through social media. All of these factors have driven a need for communication with parents and greater resources for healthy social media guidelines.

Tips for Healthy Social Media Use

Despite the risks, it is possible to use social media in a responsible manner. It allows for connections with distant loved ones, messages of encouragement between friends, and positive self-expression. With this mindset, social media can be a healthy tool, even for teens. Here are some tips for healthy social media use:

Teens’ Social Media Use: How They Connect and What It Means for Health – US Department of Health & Social Services

How to Help a Loved One

If excessive social media use is accompanied by drug addiction, it’s important to seek professional help. Look for a licensed substance abuse treatment center that focuses on each client’s overall physical, mental and emotional health, rather than simply treating addiction.

At Sprout Health Group, we guide clients through every phase of recovery, from detox to aftercare. Through education, counseling and ongoing support, we help clients build strategies and coping mechanisms that apply to all areas of life, however they might be struggling. Call the number below to learn how we can help you or a loved one.