Ritalin is the brand name of methylphenidate, an amphetamine prescribed to treat ADHD. Although effective for those who need it, the drug is also commonly abused, particularly among students and young adults looking to enhance short-term focus. Common street names include “kibbles and bits” or “pineapple.”

Ritalin is a stimulant. It works by activating the brain chemicals responsible for hyperactivity and impulse control. It can help you concentrate and listen more attentively, get organized, and complete tasks in an effective way. Many users also report a calming effect.

As a prescription drug, Ritalin is only available on a doctor’s orders. Physicians typically use it to treat attention deficit hyperactivity disorder (ADHD), although they sometimes prescribe it to treat the sleep disorder narcolepsy.

Users should take the drug, typically prescribed as tablets, between 30 and 45 minutes before a meal for best results. Patients should take extended release pills in the morning to prevent a sleepless night.

Have questions about Ritalin addiction?
Call us at 855-430-9426 to speak with a recovery specialist.

Because of its stimulant effects on users without a prescription, Ritalin has become known as a “study drug.” Study drugs are prescription stimulants that students use without medical supervision in the hope of improving their mental acuity or memory. Fellow amphetamine Adderall (dextroamphetamine-amphetamine) is another common study drug. Stimulant misuse can lead to addiction because these drugs are both physically and psychologically habit-forming. Some users start to feel that without these drugs, they will no longer achieve academic or career success.

As an appetite suppressant, Ritalin has also become susceptible to abuse as a weight loss drug. Use with co-occurring eating disorders such as anorexia nervosa or bulimia can exacerbate heart problems and dizziness.

Finally, recreational drug users also abuse Ritalin to simply attain a “high.” Administered in large doses, the drug has an effect similar to that of cocaine. Users may feel euphoric and high-energy. Recreational users may chew, crush or snort pills to achieve a faster result.

As prescribed, Ritalin is typically safe to use for patients under a doctor’s care. However, used recreationally, Ritalin can become habit forming and highly addictive. Never take more than the dose prescribed by your doctor. This is particularly important if you have a history of substance abuse or drug or alcohol addiction.

Side Effects of Ritalin

There are a host of possible reasons your doctor might tell you not to take Ritalin.

In general, you should not take Ritalin if you have glaucoma, Tourette’s syndrome, seizures, epilepsy, anxiety disorder. You should also avoid the drug if you’ve used an MAO inhibitor (a kind of antidepressant) in the past few weeks.

You should exercise extreme caution taking Ritalin if you have hypertension or high blood pressure, heart disease, or a heart defect. In these cases, the drug may cause a stroke or a heart attack. Watch out for pressure or pain in your chest, shortness of breath, nausea, cold sweats. Ritalin can also cause blood circulation problems, so watch for pain or numbness in your extremities (hands and feet). In rare cases, Ritalin has been linked to priapism, defined as a sustained and painful erection that does not result from sexual stimulation.

Ritalin can also have adverse side effects if you have depression or bipolar disorder. These include psychosis, hallucinations and paranoia. Ritalin may also cause dizziness and lightheadedness, effects that are worsened by alcohol, marijuana or other recreational drugs. Other side effects include general irritability, anxiety and insomnia.

Successful treatment for Ritalin typically involves a comprehensive approach that considers the psychological factors that contribute to habitual use. Because co-occurring disorders such as anxiety disorders, depression and eating disorders are common with Ritalin addiction, an assessment to determine a dual diagnosis is also important so clinicians can develop a plan that provides dedicated treatment for these disorders.

Recovery also often involves behavioral therapy to challenge negative thoughts and provide  coping mechanisms for facing the pressures of school or work. Group therapy and family involvement are also important, particularly for teens and young adults. At Sprout Health Group, we believe in personalized treatment based on each client’s unique history and experience with addiction. If you or a loved one is struggling with Ritalin addiction, call us to find the recovery path that is right for you. 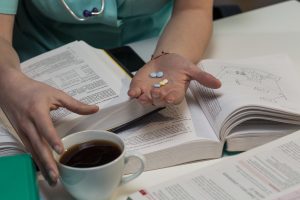 Because of its focus-enhancing effects, Adderall is known as a “study” drug.